Gunbritt was my seventh project at the Game Assembly. The game was created in our own C++ and DirectX11 engine, Yellowsnow over the span of 10 weeks at 50% work time. The projects movement reference game was Prey.

"As the company of Ikeja has been raided, the only hope left is Gunbritt, the senior cleaner who must save her beloved workplace from the danskjävlar."

The Juggernaut enemy was simple by design. They only needed to walk towards the player, and when close enough, start shooting at the player whilest moving to a target distance. As they were more tanky due to taped pillows, they didn't need to worry about combat damage.

The base enemies were a bit more complex, as they used coverpoints in their combat logic. If they found a suitable coverpoint nearby when engaged, they would run there and use cover behind them when shooting towards the player. 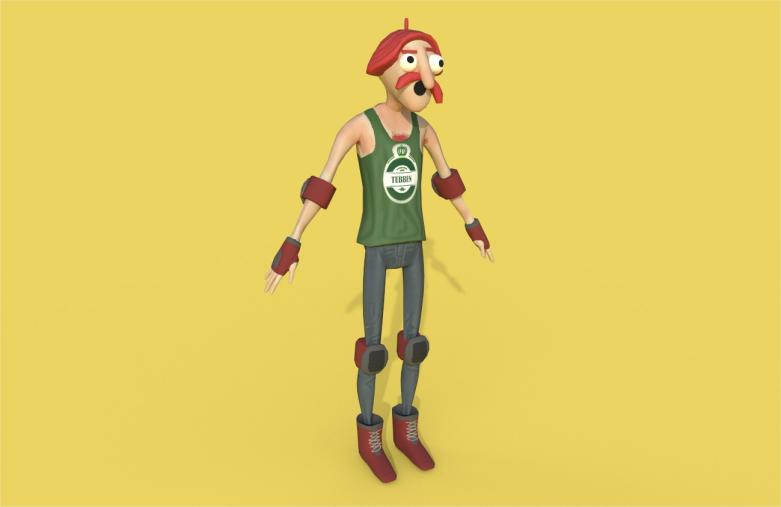 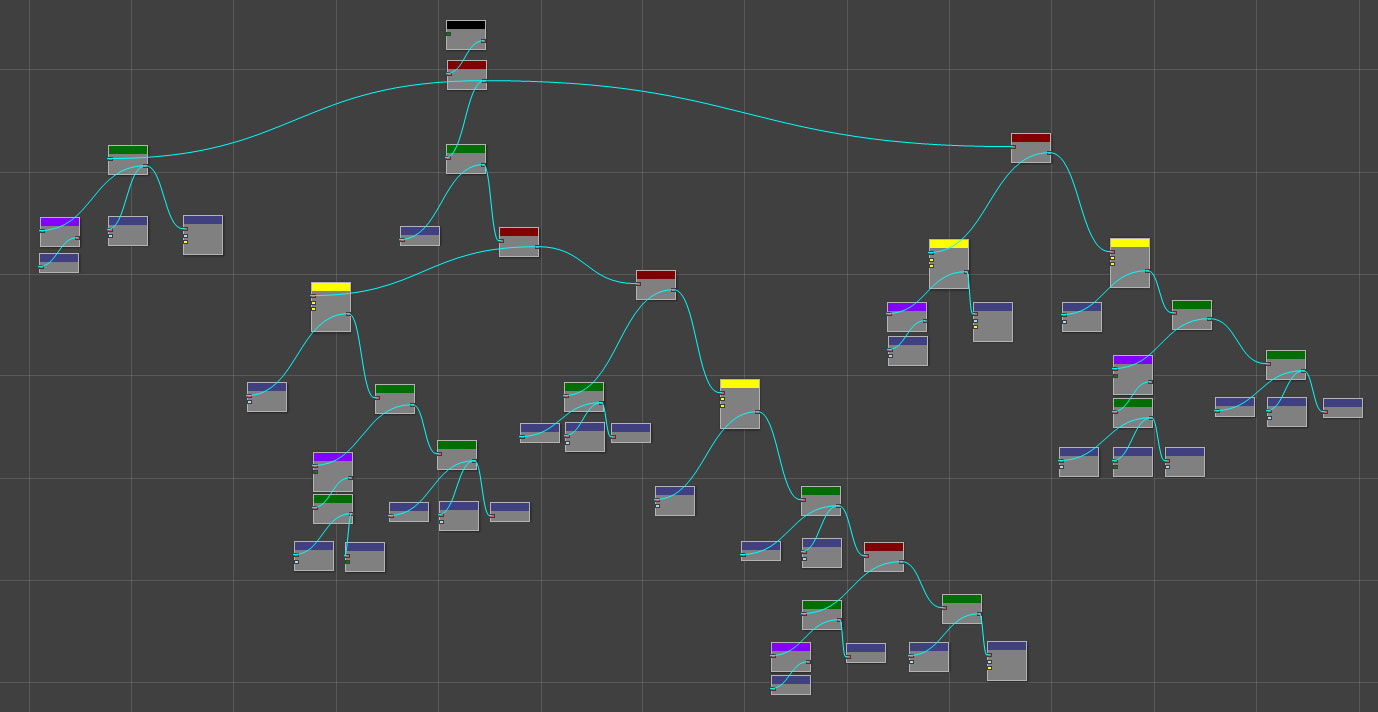 The picture to the left (above on mobile) shows how the behaviour tree for the base enemy looked like when the enemy is in combat. There were four different states that the enemy could be in while in combat.

Finding and moving to other coverpoint. In this part the enemy first checks if it doesn't have a coverpoint. If it doesn't, the enemy does another check to see if there are any nearby coverpoints that are of use. If there is one that is close enough, the enemy moves to that coverpoint. The bool, isPlayer in the MoveTo node is a simple solution to know if the target position is the players transform or if it should collect the latest targetID entered into the behaviour tree's blackboard. In this case, the latest ID is the found coverpoint. 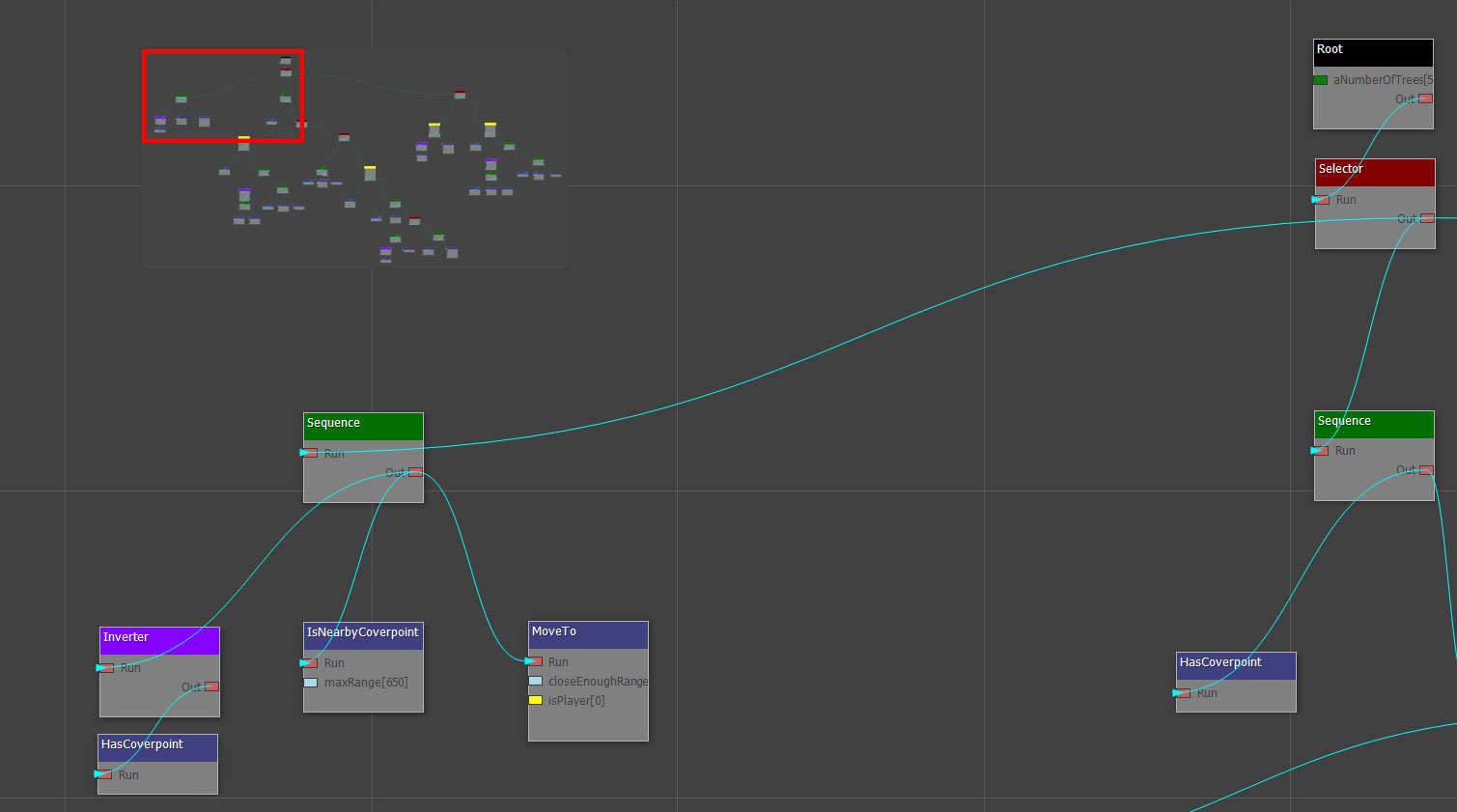 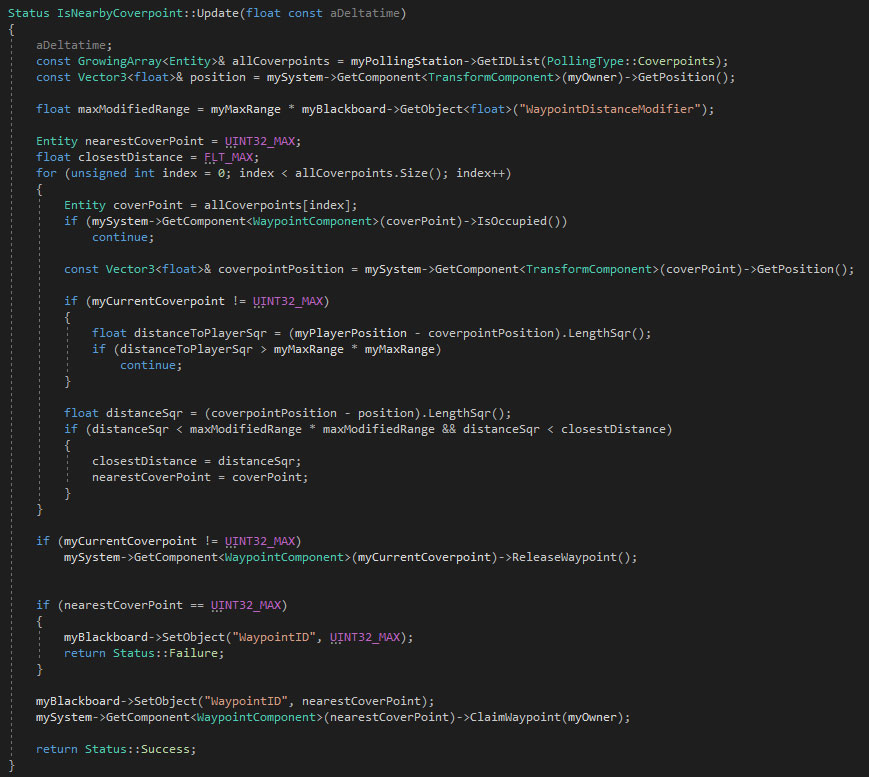 Shooting at the player from coverpoint. The enemies would always check if the player is in range and in line of sight. If they were, they would aim towards the player and shoot, in this case, 6 times repeated. When they had shot six times, they would crouch down, reload and stand up again. 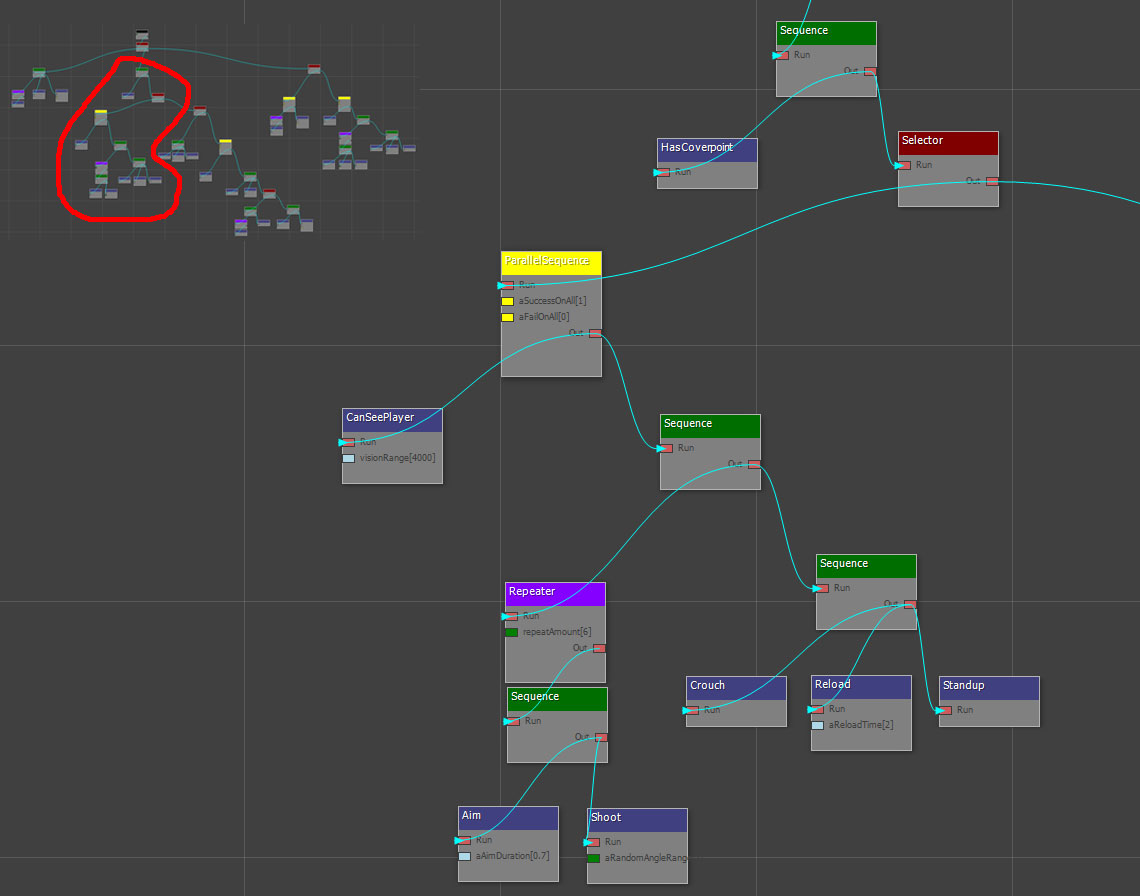 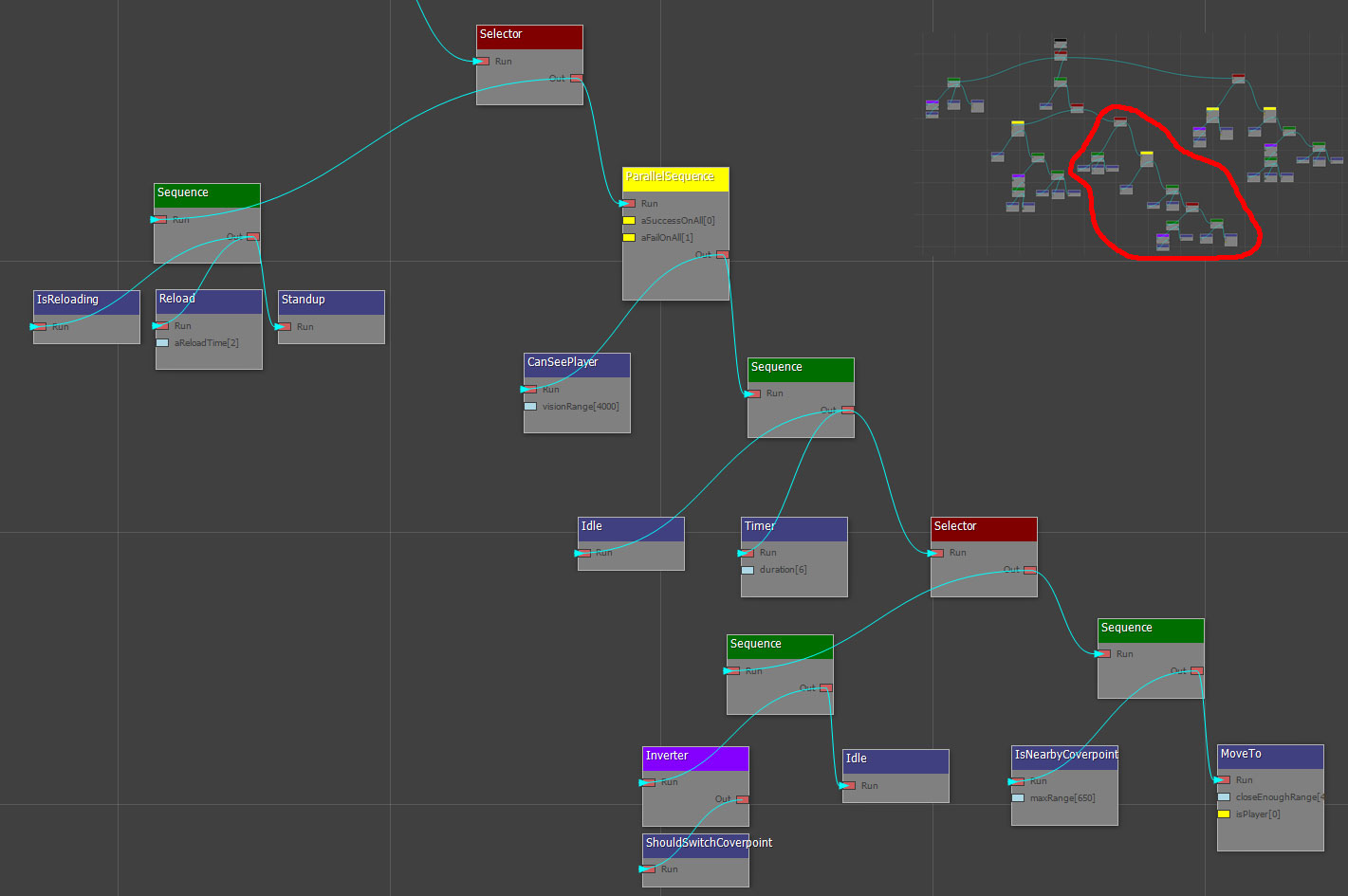 Attacking and moving towards player without coverpoint. If there were no suitable coverpoints nearby, the enemies would move towards the player. When they were close enough and the player in sight, they would stop and shoot towards the player. The shooting logic was almost identical to when enemies were at coverpoints. The difference being that they aimed for a shorter duration before shooting, making the first shot a lot faster. 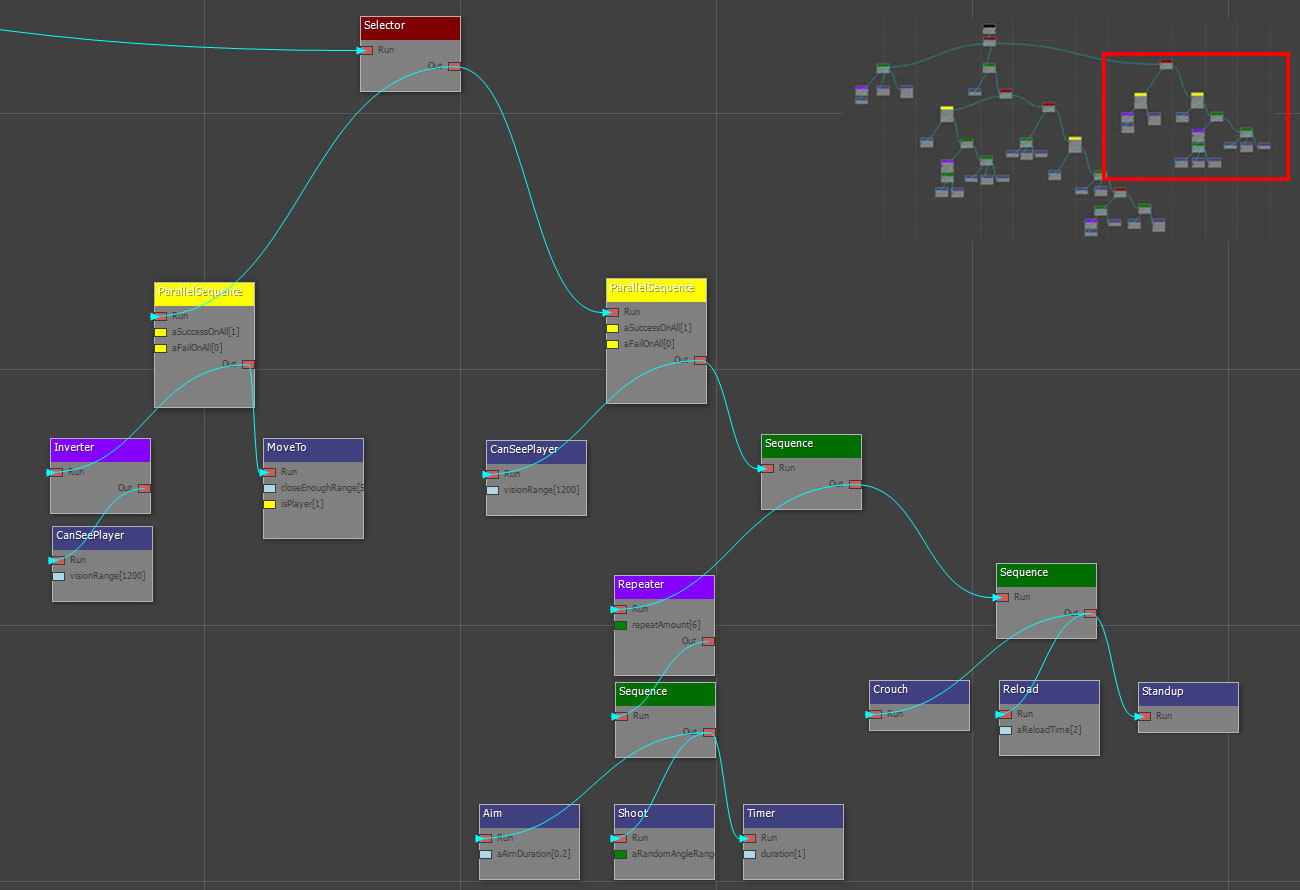